Casement Window Opening Direction: Which Way Should They Open?

Do You Want Windows That Open?

Casement Window Opening Direction: Which Way Should They Open?

When you’re outside a house, the direction in which casement windows open is called their handing. Casements are given labels such as FCL (From Curb Left) or FCR (From Curb Right). Most people want an FCL window because they prefer to have its hinges on the left so that when opening and closing them from inside the room, your hands will not be rubbing against those of guests who may walk up close to see what’s going on.

The way in which a casement window opens can determine where its door handle is located for easy access while both standing outside or walking into rooms with large groups of people milling about close by–those looking at furniture often come across this detail! 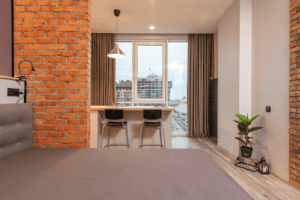 What is a Casement Window?

Casement windows open outward like doors. Unlike double-hung and sliding windows, casements have no railings. It’s a picture window because unlike those other two types of opening screens are placed on the inside where they’re better protected from outside elements such as storms or bugs! Casement Windows can come with cranks to make them wide enough for large appliances in your kitchen; if you want beautiful views but still need some protection against stormy weather – then this just might be what you’ve been looking for!

Do You Understand First The Terminologies?

You can’t make a decision with a sound mind unless you know what the window experts are talking about. When sliding glass doors operate left to right as you stand outside, the door is called a “handle left” door. The same thing is true for casement windows and how they open. They are labeled as left hand crank or right hand crank. When you are inside, the windows could crank on the right and lock on the left or the opposite.

Casement window handling can make a big difference when it comes to getting the perfect windows for your home. FCL casements have their hinges located on the left and locking mechanism on the right, whereas an FCR is opposite with its hinges in front of you and lock behind. Choosing which kind of hinge goes where has implications not just how well they open or close but also installation location-wise too!

A Casement window’s hinging side will dictate whether that particular window works best as an exterior door (with locks hidden from sight) or interior wall fixture (making them easy to clean). 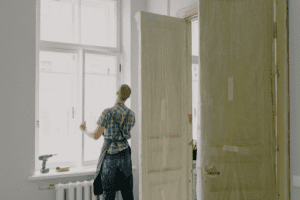 Window casements come in two styles – top-hung or side hung. Which style you choose is up to your preference and the type of window that best suits your home’s decor. Here are a few tips for installation:

Architects agree that for the best aesthetic appearance, the hinged side of a casement window should be closest to the corner. This ensures all windows open toward the middle and provides a pleasant view from inside or outside with no obstruction in sight.

When installing casement windows, it is important to position the hinges on the outside of the window so that they open like double doors and not in a book. This will ensure maximum natural light from inside or out for your home’s windows.

After you install casements make sure to set up them with their hinges positioned at an angle facing outward instead of inward; this way when opening up these two panels there won’t be any spaces between each other where air could get trapped, which can lead to dust accumulation over time as well as bad insulation against heat during winter months; additionally by having them angled toward one another ensures that people standing near either side would have access without blocking themselves from view since most homes are designed symmetrically anyway.

Cross breezes are the key to improving ventilation in your home. If FCR and FCL casement windows, which allow you to open them from either side of the house, are positioned on opposite sides then they can best catch cool air that flows through a room when it is warm outside. The cross breeze will send fresh air blowing toward one another effectively as well so whenever you need an improved airflow use this easy tip for ventilating!

Can You Still Change The Swing of a Casement Window?

Yes, it is possible to change the swing of a casement window by using different hinges. However, there are many options on the market that will allow you to manipulate the balance between latching and swinging. This adjustment can help you control if and how easy it is for you to open or close them by either being outside or inside your home.

When assembling casement windows, consider using hinges with ball bearings. Make sure the horizontal section of your window frame is even and the hinges are well seated in place before continuing to assemble anything else. Check that they can freely move back without any other pieces getting in their way.

Do You Think Of The Dominant Side Of Your Home?

When you have a casement window, say above your kitchen sink, you might find it easier to open with your dominant hand. If you are right-handed, putting the crank on the right could be easier for you.

Do You Go With Pairs And Opposites?

French doors open in the middle and on opposite sides. The same principle can work with casement windows. Put two of them close to one another and have them open in opposite directions.

Casement windows are some of the most popular replacement windows on the market. When you are replacing a whole house full of windows, many of which will be in the casement style, think about the final position of the windows and their opening directions to increase your happiness.

The little details matter and J. R. Door & Window Inc is here to help! We also offer replacement windows in San Bernardino, CA. We care about those small details just as much as you do and we won’t give up until you have everything just as you want it. Call us at 909-949-9902 and let’s chat about casement windows.